Disclaimer: I was invited to a media event to sample and photograph dishes from Buttons for purposes of this review. No other compensation was received.Â

There’s nothing better then delicious food…unless of course, it’s great food accompanied by great friends and some great story-telling.Â

Then you know it’s GOOD. 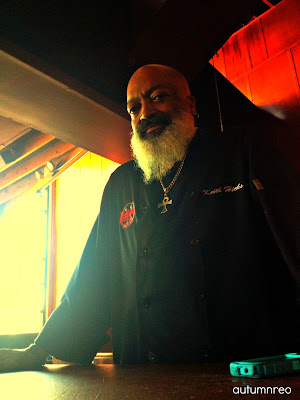 So when I had the chance to sit down to eat a little soul food during “National Soul Food Month” with Mr. Soul Food himself – Chef Keith â€œButtonsâ€ Hicks of the award-winning Buttons, I brought my appetite and prepared myself to learn a little something about about soul food (something I know very little about.)

â€œAs a kid, I would watch my grandmothersâ€™ cook by simply adding a little bit of this and a little bit of that and often just making something real good out of nothing,â€ said Hicks. â€œThey would have the entire house filled with great soul food aromas that would have you anxiously waiting for the food to hurry up and be ready. I knew back then that I wanted to be able to do the exact same thing.â€

Can you dig it? (Which is also one of Hicks’ token phrases.)Â

However, some of things I was able to get my hands on included the new wedgeburg salad, Joshâ€™s pasta, fire grilled chicken & plants, fried green tomatoes and sweet potato mini pie.

â€œSoul food has a deeply-rooted history that will continue to be told and experienced for as longÂ as people continue to enjoy and appreciate great tasting food,â€ said Hicks. â€œIâ€™m grateful to be able to continuously spread that history through each of my southern recipes, while also building upon the legacy of soul food.â€

Derived from the expression of “soul” music, soul food was a culinary movement spawned in the 1960s. Prior to that time, soul-style cooking was simply known as comfort food or southern comfort food, which originated with African slaves in the United States who were given food parts that their owners did not want to eat (i.e. pig’s feet, beef tongue, ham hocks, chitterlings, pig ears, and tripe as main delicacies of soul food.) Included are also many foods that came from the African homeland such as okra, black eye peas, watermelon, yams, and many leafy green vegetables.Â

And because there was a scarcity of meat, the people during this time learned to trap their own wild game and created meals such as shrimp, fish and grits. Meat was primarily consumed on Sundays because it was considered to be a special day. Â Post slavery, many African-Americans in the South would enjoy hearty meals like chicken and waffles on Sundays to keep them full and satisfied throughout the day because church and many other related activities often would consume most all of their time.

Now that’s food that is good for the soul.Â

So go give your soul a little love and get you some soul food this National Soul Food Month at Buttons.

Not gonna lie… we are obsessed with frito pies.

We DONUT skip a donut opportunity! 🍩 Have you