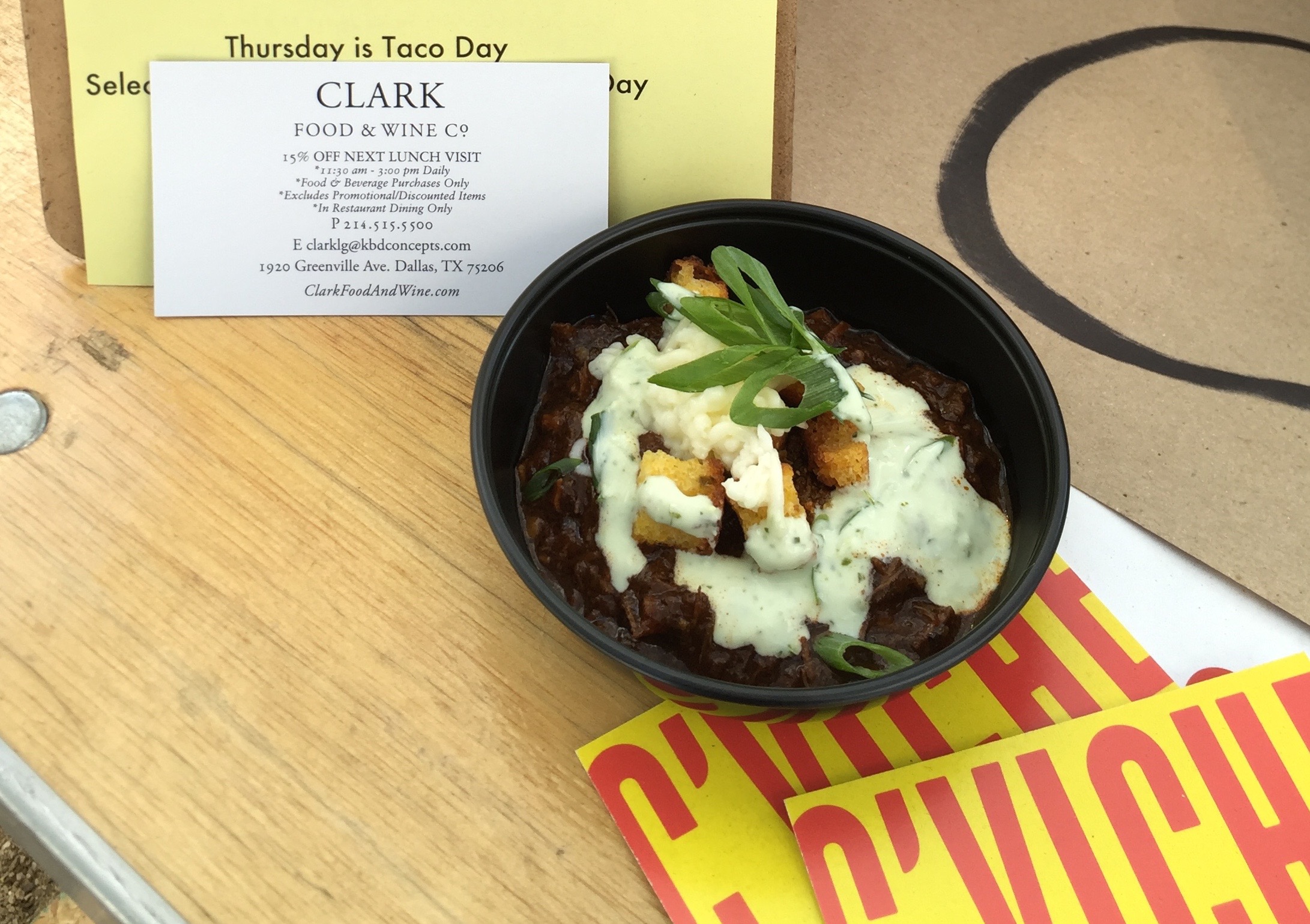 The first ever Truck Yard Chili Cookoff was one of the first fall events held in Dallas on October 11. Locals showed up to support five Dallas chefs by sampling lots of chili, washing it all down with a sip of ZiegenBock beer, and voting on their favorite.

Even with a high of 94 degrees on the day of the cookoff, the chefs didnâ€™t let the unseasonable weather stop them from serving up chili with unique toppings. Brisket and cilantro both had culinary moments at the cookoff, and itâ€™ll be exciting to see what Dallas chefs do with these ingredients for winter-weather food later on this year.Â

Danielle McPherson, chef from Remedy and HG Supply Co., had a delicious three-bean chili with brisket that was incredibly tender. Her combination of black, kidney and pinto beans set this chili apart from all the competitors. Topped with your choice of cheddar cheese, sour cream, and scallions it set the bar high for each of the other contestants.

In the line of tents occupying the back area of the Truck Yard, where food trucks usually idle, the second entrant in the cookoff was a rich brisket chili from Nathan Tate, chef at Rapscallion & Boulevardier. With arguably the most unique toppingsâ€”cilantro crÃ©ma, pickled red onions, and chopped scallionsâ€”this hearty chili came with a cube of duck fat-cornbread on top.

Taking a refreshing sip of beer between chili samples was a nice break, as was the bison chili from chef Jon Stevens of Stock and Barrel. He was crowned the eventâ€™s winner for his bison chili, seasoned with cinnamon, carrots and onions. His chili was topped with bleu cheese, cilantro, scallions, and BBQ chipsâ€”croutons flavored with traditional bar-b-q seasoning.

Holding down the final spot was Gaham Dodds from Hibiscus. As the lone entrant with ground beef, this chili stood out for itâ€™s simple, authentic flavors. Topped with homemade crÃ¨me fraÃ®che and fontina cheese, the flavors were very comforting. Chef Dodds also brought fresh jalapeno cornbread that was moist, sweet, and spicy.

With all proceeds going to Angieâ€™s Friends Animal Rescue, the $25 price tag for samples from five of Dallasâ€™ top chefs was worth it. The chili felt heavy in my stomach all afternoon, and next year Iâ€™d encourage the organizers to hold the event in November to ensure that the weather was more enticing for those who wanted to eat chili. However, itâ€™s now apparent that in Dallas this winter, itâ€™s going to be very easy to get a good bowl of chili.

Counting down to 🎄 with our new beer advent cal

Can’t decide where to get take-out? 🥡 You don